People under the ground

If you come to New York City for the first time, some sights stay with you forever. Like the never ending flow of tourist in Times square, or people rubbing the balls of the bull in Downtown. But the most distinct thing is the smell of the city. It goes into your nostrils and occupies a special space in your brain. When you first walk down a subway station, it hits you. Hot air mixed with things you can not even distinguish. If you keep going down, the cocktail gets even interesting. New York City has 8.5 million dwellers. More than half of them live underground. Every day 5.6 million people travel thru the subway lines. It is vast system numbers and letters going almost anywhere you want. Learning the etiquette and lingo may take a while. But once you get the basics you find your self rushing to the trains even though you know the next one is arriving in minutes.

People watching is a thing I do. It’s not staring. Well, sometimes it involves that but more like observing people and trying to guess their life. A friend told me there is French word for it. “Fláneur”. French has to have a word for everything, right? I don’t do it all day long. But since I ride the subway everyday, it is a good way to kill some time.
Some people just want to go somewhere. They rush. I see them in the mornings. Always have that dreaded look on their face. It is a blue collar worker. Thinking about money, feeling the squeeze of the city. Or a Postal worker after the shift. Tired of walking. Happy to find a seat.
Some sleep. I don’t know how the manage to exit at the right station. Or maybe they pretend to sleep. Or they developed a reflex. Still working on that part.
The book readers are ok. They hold a book or a kindle with one hand and grab onto something with the other. Still be able to stand up. Even for one stop they read. Time well spent.
People don’t look at you. They do but, If you are not a model or a celebrity, you are transparent. They are so focused on the ride you are just a place holder. A person, that must be there to complete the ambiance. Once you are gone, you don’t exist anymore. Strangely I feel the same way too.
The only people that will look around, are the tourists. Since Subways are the easiest way to get around city I see lots of people looking at the maps and signs with no clue. Mostly going up and down in Manhattan, from one spot to the other. Large families with the whole gang from Grandmas to babies. Couples planing the day, kissing and looking happy. 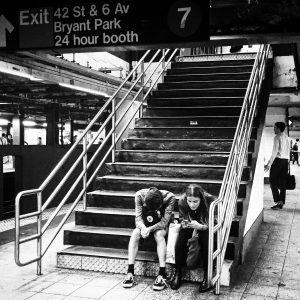 Maybe on their honeymoon. Parents dragging their teenage kids, who are always upset for some reason. 50 million people visit NY every year. Chances are you will find an outsider on every train at any given time. Another thing you can find in a subway car is the occasional beggars or entertainers. Some of the them come and ask for money outright. Some sell a pack of napkins or a pen. They jump from car to car. Riding all day long. I like the entertainers. They start with an intro. Like “I’m an inspiring singer, trying to earn my tuition. Now I will sing a song” most of the time it is not that good. But sometimes they can surprise you. Check http://bit.ly/2bUFfmb. Anyhow, it takes courage to stand up and sing for total strangers.
People go in and out constantly. The tunnels look like endless pits. The heat is sometimes unbearable. Trains are like busy caterpillars. Moving, stopping, moving.
It is New York…